Many Step Process for Cleaning the Mud from Your Feet 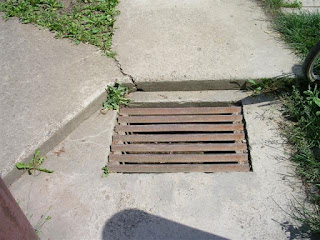 Choose your places of walking that incorporate the least amount of mud and fecal matter.
Use the open grid and scuff the largest amount of mud from the bottoms, if there is water under the grid you hear the reassuring sound of the rock plop into the water! That’s a cool sign of progress.
Posted by Donna at 11:57 AM 1 comment: 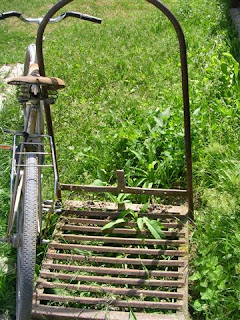 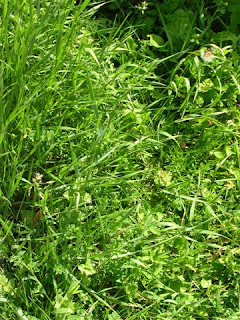 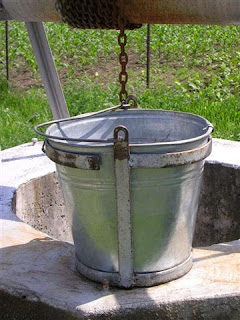 Then scrape in the grass until there is space around the bucket of water, the bucket will have a long handled scrub brush for a more detailed removal of the mud on your shoes, At this time you work on the top as well as the bottom. Rinse the brush as often as you need to in order to have the clean shininess of your shoe to show.
Next wipe and stomp on the first matt at the bottom of the stairs, scuff the potential drippings off at this time. Do use you eyes, if the matt is extremely dirty you will only compound your problem and need to return to the bucket step.
After this step, you just need to do a neat and tidy scuff of your shoes on the top step with the clean matt and enter the church. Or home, or store. Whatever. Unfortunately you need to repeat this process every time you go outside and take one step on a wet and muddy day.
Posted by Donna at 11:47 AM No comments: 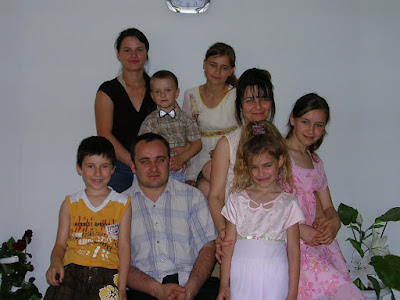 This is the family we have been teaching English for the last three months! 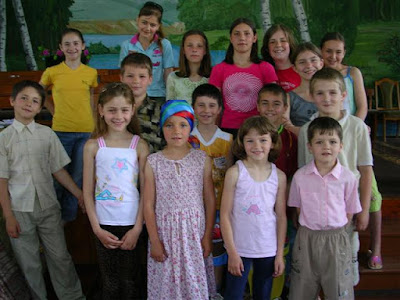 Our children during their final practice. It's a good thing we are finished, because they are! School is out for them and it's hot, very hot. 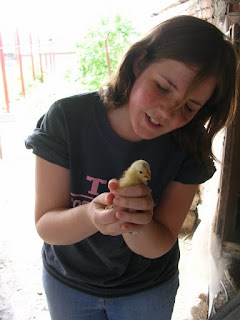 Steph rescued this little chick with Ron's help. This little baby was the LOUDEST chickie we have ever had to listen to. However, Steph found his brother and she and Viorica returned them to their mama (we think).
Posted by Donna at 5:03 PM No comments: 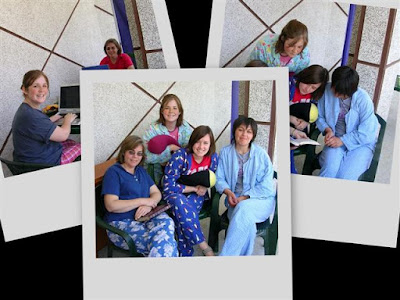 Early Morning Prayer Meeting in our "jammies" the rest of the team were too chicken to join us holy ones in the picture!
Posted by Donna at 5:01 PM No comments:

These are our "Sad Faces" 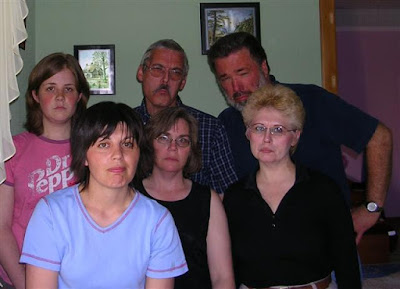 Good bye Brandy, we will miss you. Brandy has just left for a vacation with her family in the states and we will certainly miss her! 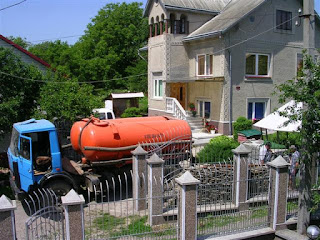 Now, you need to know that living in Eastern Europe is a fascinating place. When we lived in Moldova, a truck came several times a week to pump out the septic tank, but we always had water! We didn't know how much of a blessing that was until Ukraine. Now, every now and then we don't have water and. . . you guessed it, a truck comes and fills the well!
The first well, is the neighbor's house, he is our landlord. The second well is ours for our apartment building. After the big truck comes (it does resemble the septic truck i 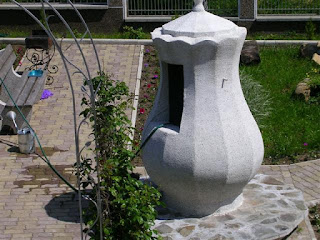 n Moldova) they fill our little well with a garden hose! No wonder they recommended that we not drink the water!
Posted by Donna at 4:52 PM No comments: 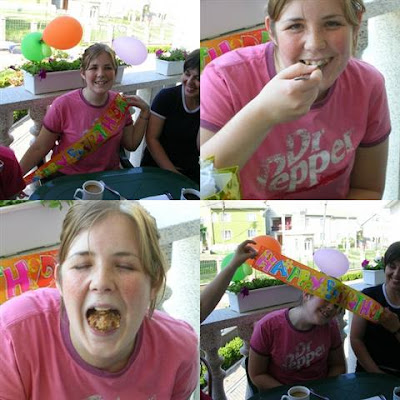 Our Personal Superhero Family, The "Undesirables" 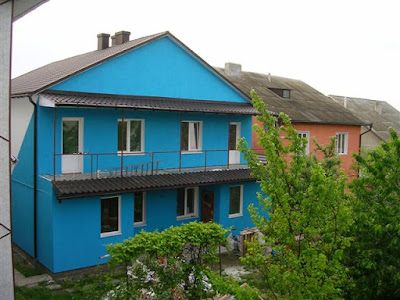 Okay, so you need to know the extent of our weird life! This is about our neighbors with the dark brown roof on their house, which was just painted smurf blue. Frightening. Anyway, we have named our neighbors for valid reasons. Okay, the lady is Spandex Mama. Picture this? Well, most of the time she wears a tight tank top and bright purple spandex shorts (with flames on the sides). She has a son. The other night this skinny, muscleless marvel was outside yelling at the neighbor dog (white dog) in his whitie tighties. Only in his white underwear, understand? We call him Underwear Boy. And now there is this young girl, in her late teens. She was hanging clothes out on the line to dry in a tee shirt (I like her tee shirt, it’s larger than her mother's and a bit longer) but it was all she had on. When she reached we got a view of her dark blue thong. Now, we call her Thong Girl. This girl sunbathes in her yard in a tee shirt and socks. And her mother sunbathes in a light colored bra and her dark blue underwear. You need to know the newest members of the superhero family – THE UNDESIRABLES: spandex mama, underwear boy, and thong girl.

We are smiling in the picture, but on this day. . . 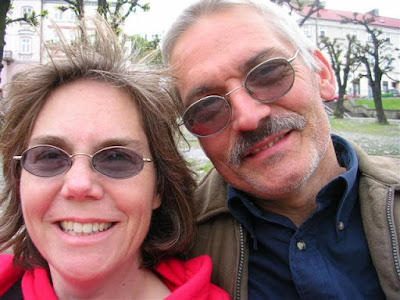 Okay, so I want to vent! Yesterday it was a bit hot. Okay very hot, and everyone in the city was in a nasty frame of mind! A man stepped on my foot and had the audacity to yell at me! Hello – I’m not that small that he couldn’t see me! In the grocery store. . . everyone had a cart and they weren’t afraid to use them! They used them to run into others, to block aisles, and as weapons of mass destruction. It was just plain unpleasant! I say, if you are hot, take off your coat!
On the bus, people stood in the aisle even when there were seats; which makes it hard to see where the bus is! It was just an interesting day to be in the city. People were crabby (perhaps because of the heat) and it made me feel crabby! I hope that being in Eastern Europe where service and kindness are rare doesn't become a habit for me.
Posted by Donna at 12:19 PM 1 comment: 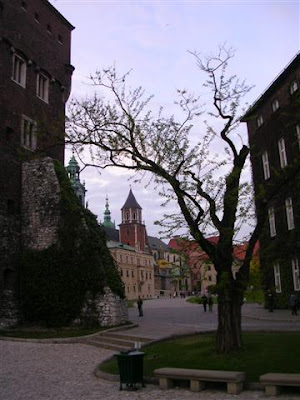 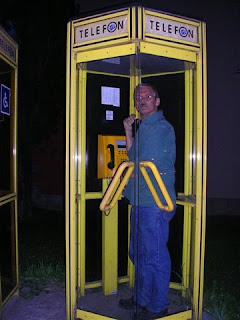 Ron in the inevitable phone booth! Every country has phone booths in different colors and designs, have you ever noticed that? Well, in Poland they open at the corner and open both ways for a person to step out nicely.
Posted by Donna at 12:15 PM 1 comment: 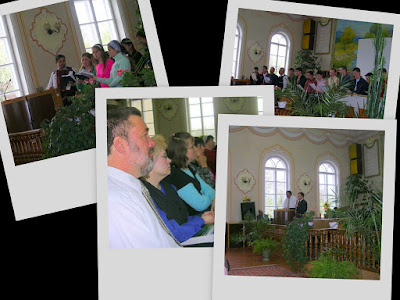 So, while the team from Moldova was here, instead of our regular routine of going to the villages, we helped with a youth conference. A team from Romania came to provide this for the youth of the local, Romanian speaking churches. Teens from local villages, including the ones we are working in attended and we had some pretty important jobs. Ron preached to the teens about the need to pray, Mike preached on women (we don’t know why that was the topic), and Lilian (yes, even our visitors from Moldova participated) preached on the value prayer has had in his life. The young people sang quite a few songs, and the rather large church was packed! It was fun to participate in this and to see the desire some of the young people in Ukraine have to follow the Lord!
Posted by Donna at 12:14 PM No comments: 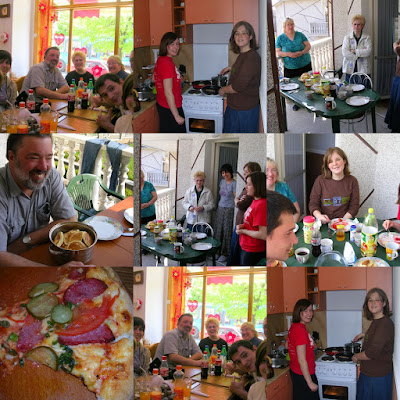 Several teammates from OM Moldova came for a visit. They came on Thursday afternoon and stayed until Sunday afternoon. Our apartment is the home of meals for our team and it was so crowded that we had breakfast outside on the patio. It was a beautiful morning, Brandy and Steph made the pancakes, Mike and Myra made the scrambled eggs, and Ron and I set the tables, set up the situation for eating, and allowed our space to be invaded!

On the train to Krakow, Poland! We are having fun! 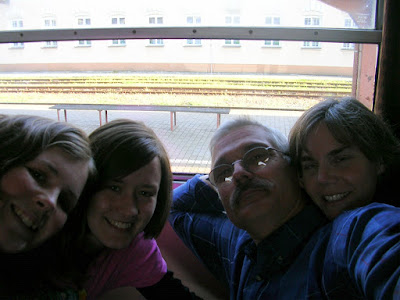 Hanging out in Krakow 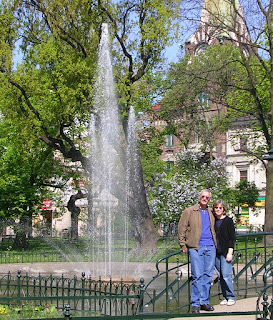 Hi from one of the many beautiful parks in Krakow. This was a great break from ministry and adjustment into a new culture! In Poland, we weren't expected to learn any language, to know how to get around, and we didn't have to try! We just enjoyed the city and the people there.

At one time the castle and main city were surrounded by a moat (the original drawbridge is still there) but that moat has been filled in and is now this lovely park that surrounds the old city.

The city has four historical parts, the old city with the castle and walls, as well as the tower where the famous trumpeter lived. The second part is the Jewish section. It seemed the Jews couldn't live in peace with the others so they moved into their own area which is virtually empty of Jews now. A third area is the ghetto where the Nazi's forced the jews to live, the original wall is still intact and you can see where the trams were forced through a single gate into the ghetto. The fourth area, we didn't see, but didn't think we needed to was the communist section. We assume it's what we live in in Moldova!

As you can see in one of the other blogs, we did a bike tour of the city and got a great overview of the history and Ron, Steph, and Brandy did a tour out into the countryside on the last evening we were there. 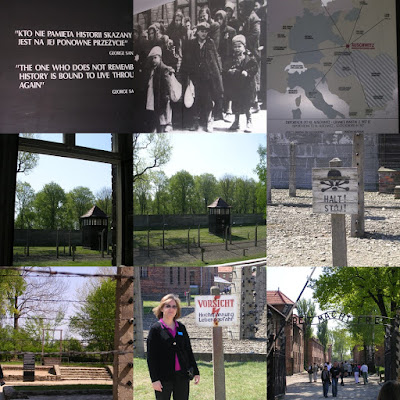 This was an incredible opportunity to walk back in time. It was amazing to see the extent of the evil man could think of for man - frightening. The banner over the entry says "Work Brings Freedom" and the only freedom truly offered was that of death. A heart breaking place. I hope that we all remember the horrible cost of this event and don't repeat it! 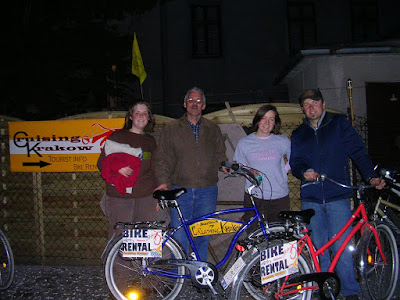 This is Mike, our tour guide for two trips on bikes. What a great time - thanks Mike for all your work!

Hi from Poland! We are here for about four days. . .and today we saw Auswich. . .more on that and pictures later. Just know we are having a good time and it wasn't too far by train from where we are living in Ukraine!
Posted by Donna at 11:29 PM No comments: